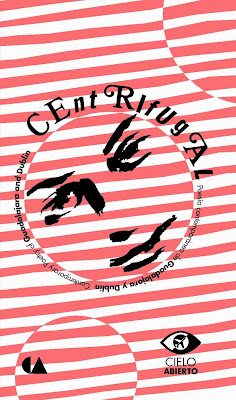 EMAIL ME TO BUY


7 poets from Dublin and 7 from Guadalajara exchange selections of their work in pairs and render the work of their partner poet in the opposite language. The emphasis is on re-interpretation rather than traditional translation: the poems become new in the hands of the partner poet while bearing the poetic core of the original.

Centrifugal investigates the multiple possibilities of meaning released through the transfer of texts between languages. The poets' responses range from rewrites to deliberate mistranslations to dialogues with the originals to entirely new poems. Some make use of a near native-level knowledge of the opposite language, and some require literal translations of the source texts; others resort to dictionaries, web searches or Google Translate.

The writing presented in Centrifugal "strays from the centre, away from the main stream of how poetry and translation are expected to behave". In addition to providing a record of the work of some of the outstanding poets currently writing in the two cities, this book stands as a significant contribution to the exploration of the relationships between language, geography, identity and poetry.

what they said about Centrifugal


[Anamaria] Crowe-Serrano also features as translator, though also as poet, in the collection Centrifugal: Poesía contemporánea de Guadalajara y Dublin / Contemporary Poetry of Guadalajara and Dublin edited by Ángel Ortuño and Christodoulos Makris (Conaculta/EBL Cielo Abierto). This features seven poets apiece from Ireland and Mexico, each translated by the other and again all presented in parallel translation (source language on the verso, target on the recto). As Makris notes in his introduction, for the Irish poets involved, it is a collection less about national identity (three of the seven – Kit Fryatt, Kimberly Campanello, and Makris himself – were born outside Ireland) than about writing and language, with an emphasis on innovation and experimentation: “Its premise revolves around an uncertainty regarding the notion of stable relationships between environments, around the slipperiness of language and a suspicion over fixity of use and intention – consequently, around subverting employment of it in absolute terms or as a centralising force” (11). The ever-interesting Catherine Walsh has a wonderful piece called ‘A Picture of a Portrait of Charlotte’ (taken from her 2009 Shearsman collection Optic Nerve) translated by Laura Solórzano, though it is Solórzano’s own short mostly paragraph-like prose poems in Walsh’s translation which for me are the highlight of the collection:

I gave epitheliated spirit to your unabstracted sleep. Your phalange caught me as if I were one more wishboned politic pain-in-the-neck who had lost their bearings or locus. I grounded the dream, right with you, with the collarbone showing its primitive chastity.


Other stand-out contributions in this excellent collection are Kit Fryatt’s ‘Poem Beginning with a Line by Pat Califia’, and Alan Jude Moore’s translation of the work of Xitlalitl Rodríguez Mendoza, complete with a very perceptive translator’s note, where he hopes that the poems in translation “on their journey [to English] have taken on, for a while at least, the patched up cloak of our language” (95).

On Saturday 5 September I will present a new long poem with title 'Capital' at the Irish Museum of Modern Art (IMMA).
This is part of a programme of events for The People's Pavilion installation, a public outdoor space located on the museum's front lawn where people can meet safely in specially designed social distancing circles.
From the event description:
'Capital' is a polyphonic poem composed of fragments of text from unattributed reviews of establishments on Talbot Street, publicly available on Google Maps. It has its roots in Makris’s longstanding interest in the shifts in language use, communication and identity brought about by digital media, and their implication on poetic discourse.
The poem maps the street through the kind of public-private writing prevalent online (the reviews often stray into personal anecdote). Its documentary and fragmentary nature also responds to the early post-Covid conditions, our toggling between 'real' and online geogra…
Read more

A review of this is no longer entertainment appeared on PANK Magazine last week, written by Hayden Bergman - poet, translator and Books Editor at The Literary Review.
Founded in 2006 by M. Bartley Seigel and Roxane Gay, PANK Magazine is a US literary magazine "fostering access to innovative poetry and prose, publishing the brightest and most promising writers for the most adventurous readers". It is currently edited by Jessica Fischoff and Chris Campanioni with a remit to "advance the original vision of the founding editors and the rich history that’s published so many innovative voices".
In his review Bergman names some of the subject areas the book covers and writes that "it does so in an acrobatic manner, darting between poetic registers, code-switching from satire to sentiment". He considers it being marked by collisions of ideological extremes, and comments: "Makris writes in a way that takes note of the pleasures and pitfalls of extremes whil…
Read more

I am pleased to announce the release of a video with title 'framed entertainment'.

Enabled through receipt of an Arts Council of Ireland Covid-19 Crisis Response Award, 'framed entertainment' presents raw footage from a private reading of a hybrid text composed of sections from my third book this is no longer entertainment interspersed with fragments of theoretical framework taken from my introductory essay 'Poetry and Cultures of Feedback'.
Conforming to full Government of Ireland lockdown restrictions (Phase One) the reading was for an audience of one and it took place on a remote beach within 2km of my home; it was filmed by a member of my immediate family on their personal device, and the video was home-edited using widely-available amateur tools.
With thanks to the Arts Council of Ireland for the award.
The Arts Council of Ireland introduced this special award in April 2020 to support Ireland-based professional artists across all disciplines in creating and di…
Read more
ABOUT