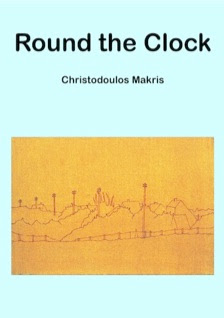 
what they said about Round the Clock


‘First impressions suggest
I could be a contender
for intimacy….’ From ‘Portrait of the Artist’

These provocative opening lines begin a controlled explosion of twelve poems that reveal inner prepossessions and fiery confrontations to self, and country. They are charged with desire and a powerful will, in denial of pessimism and challenging ideas of how we feel about ourselves, with an instinctive sense of brooding irony.

Portrait of the Artist seems like a reflection on the self-importance of the artist in general, something to which no-one is immune. The overgrown village cannot accept the artist, and neither can the metropolis, without thrill-seeking, money and sex.

The Impressionists and The Studio at Les Lauves describe the very potent sensibilities the poet is in fierce possession of. The poems investigate importance; the importance of art, which does not need to be lauded as ‘the best’ and can never be catalogued as such. In The Studio, there is something magical about

‘A bedless house; a lime tree
cloaking it in ordinariness.’

But then there is the problem of kids and visitors perhaps missing the beauty of something so untouched and unadulterated. The Impressionists is far less subtle, raging in hilarity or the madness of the ego, and seems almost like a Soviet poem in its thunder, its harsh indictment.

The footballer, Zidane, the ’86 World Cup, a childhood wrestler, Tommy Lee of Motley Crue, all fall into stanzas of neatly observed concerns over fame and infamy, and the importance or use of both. Makris’ feeling about heroes is gratifyingly low; Pamela Anderson and Tommy Lee have to contend with Chekhov and a chess club.

Serving and Fucking is well-crafted and reaches a heavy climax, kicking against its structure. These poems are classy and not afraid of slipping in and out of time, lucidity, form and have a sophisticated emotional brevity which is deeply masculine, unique and extremely abrasive and powerful. The Palace takes us elsewhere, after the rage and the complex self-betrayal and denial so unhesitantly conjured; it is a poem about sexual intoxication, and intoxicates. The idea of woman as a place which can be sought and reached, possibly conquered, is purely delightful.

‘I set up traps and barricades so that I could walk the streets alone
and go to her palace.’

There is so much to be said for a chapbook that’s as readable as an upcoming full collection. Chapbooks are real grassroots volumes for poetry lovers and 'Round the Clock' proves we should all be indulging in more of them.

A poet from Cyprus based in Ireland, Christodoulos Makris writes witty, extraordinary work. This is a chapbook from Wurm Press, described in a review as ‘a controlled explosion of twelve poems that reveal inner prepossessions and fiery confrontations to self, and country. They are charged with desire and a powerful will...’ I was knocked out by the skill of this writer; he deserves to be taken up by one of our good/big poetry publishing houses.

"Round The Clock" is eclectic and doesn't really follow a theme. Standout poems are "The Impressionists", "Competitor Vassilaras", "Serving And Fucking", and "Ginsberg in Fingal". "The Impressionists" is a timely statement on entertainment today and its effect on the artist (I use "artist" here broadly, to include all the arts). Impressionist painters are depicted as being on a reality show competition where the viewers vote for the one they like until all but one of them are dead. It forces meditation on just what art and artists are subjected to in the modern environment. The end result does and should make the reader uncomfortable. "Competitor Vassilaras" reads like a childhood memory of the poet's father and documents a shocking moment when the theatricality of wrestling was invaded by the all-too-real. "Serving And Fucking" is a statement on immigration and prejudice, exile and loneliness. "Ginsberg in Fingal" reflects an ambiguous feeling toward Ireland and perhaps offers a view of it that is clearer than those native to that country can see for themselves. In the U.S., this kind of poem from an immigrant is cliche, but in Ireland it must have been a small revelation. What Ginsberg would think about his increasing cameos in 21st century poems is anyone's guess.

I am pleased to announce receipt of a 2020/21 Literature Project Award from The Arts Council of Ireland: Poets Kimberly Campanello and Christodoulos Makris have been awarded a Literature Project Award to collaboratively explore space-time dimensions of travel in the age of digital/anthropocene. Dublin-based digital publisher Fallow Media will disseminate the result through a discrete digital publication to be released in late 2021. Time is elastic in the age of the digital/anthropocene, and our perception of physical spaces, including how we navigate them and the resonances they have for us, have altered. This creates a vertiginous contrast between our increasing scientific awareness of geological 'deep time' and the eternal present of the digital 'update' and 'scroll'. The recent past of easy travel has become a distant past, possibly not to return. We will explore how the two dimensions of travel (space-time) work across each other by writing in dialogue wi
Read more

A review of this is no longer entertainment  appeared on PANK Magazine  last week, written by Hayden Bergman - poet, translator and Books Editor at  The Literary Review. Founded in 2006 by M. Bartley Seigel and Roxane Gay, PANK Magazine is a US literary magazine "fostering access to innovative poetry and prose, publishing the brightest and most promising writers for the most adventurous readers". It is currently edited by Jessica Fischoff and Chris Campanioni with a remit to "advance the original vision of the founding editors and the rich history that’s published so many innovative voices". In his review Bergman names some of the subject areas the book covers and writes that "it does so in an acrobatic manner, darting between poetic registers, code-switching from satire to sentiment". He considers it being marked by collisions of ideological extremes, and comments: "Makris writes in a way that takes note of the pleasures and pitfalls of extrem
Read more

'this is no longer entertainment' reviewed in Poetry Ireland Review

Issue 130 of Poetry Ireland Review (April 2020) carries a review of  this is no longer entertainment . Written by David Toms, the review piece is titled 'Feeding The Engines' and in it my book is considered along with books by Matt Kirkham and Natasha Cuddington. Toms opens with a paragraph on Shoshana Zuboff's groundbreaking work  The Age of Surveillance Capitalism and in particular on her use of the term 'behaviour surplus', identified as 21st century capitalism's driving force and the internet's central product - which serves as an introduction to his discussion of my book. Writing about this is no longer entertainment  he argues that "the title itself is a stark warning, as strong as Zuboff's core argument" and calls the book "a sustained and at times terrifying glimpse of the world as it now exists". Later he writes: "We talk about the online and offline, although the line between one and the other - as Zuboff's work d
Read more
ABOUT