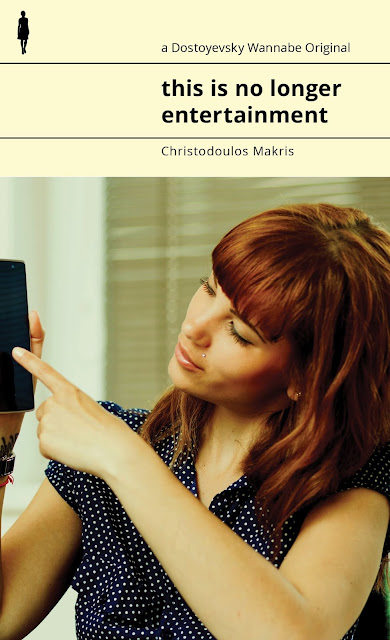 this is no longer entertainment is formed entirely out of untreated anonymous or pseudonymous text found in the open comments sections of media websites and other digital platforms. It was composed by filtering this un-authored writing through a process of immediate, instinctive selection and reframing, which is inevitably modulated by the author’s interests and emotional temperature. The poem’s composition roughly covers the period 2014-2017; a period marked by a range of notable social-political shifts and events. In its use of avant-garde compositional methods as parallels with experimental documentary filmmaking practices, this is no longer entertainment borrows from and extends the documentary poetry tradition. It is a poetic exploration of public-private language and multiple/shifting personas enabled by digital technologies and communication, and their effect on social discourse and the broader political climate. Cumulatively, the juxtapositions of the primary material consider mutual influences and intersections between themes like (mis)-information and error, the diffusion of authority, pop/celebrity culture, identity politics, the rise of nationalism, and others.

Excerpts from this is no longer entertainment have previously appeared as individual poems in the following journals and anthologies: some mark made, Poetry Ireland Review, Icarus Magazine, CORDA, Paris Lit Up, The Pickled Body, Studies in Arts and Humanities (SAH) Journal, Free Poetry Irish Anthology, Wretched Strangers, Hotel Magazine, The Tangerine.

A non-sequential 10-page selection from this book while in progress formed the text of my limited edition pamphlet if we keep drawing cartoons (If A Leaf Falls Press, 2016).

'Poetry and Cultures of Feedback', a short essay introducing the book, was published in The Irish Times on 9 May 2019.

A starkly innovative, by turns funny and worrying book.

This is really rather glorious, and poetry isn’t like receiving communion. And the cover is quite fabulous. Go buy it, folks.

A very intriguing book. Themes emerge, repeat, are revisited and sink into the reader's consciousness... like listening to some kinds of jazz.


A huge work and an imprint of our time.


An incredible book that I happily devoured in one reading. It communicates [...] just how comical, upsetting, absurd and dangerous the online extensions of living can be. A great and important book.


[...] In Poems 47 to 51 in particular, the collision of Irish identity politics with the Syrian refugee crisis and immigration is unflinchingly laid bare with a jostling of voices and all the horrific figurative hyperbole one finds in comments sections. Crucially, these figurations are often repeated across comments in a ritual manner [...] It is difficult to imagine an Irish lyric poem addressing this subject as effectively or explicitly, yet this poem, through the material it deploys, relies on our familiarity with the moves made by lyric poems. We continually await the lyric speaker to appear, the one who will enunciate and therefore clarify for us where our voice, the reader’s voice, sits in all this cacophony; we are waiting for the lyric poetic speaker to tell us what to say so that we may shape the words in our mouths. Markis’s refusal to do this is vital to the overall project.


Kimberly Campanello
(from the conference paper '"I was not able to help, but I tried my best": Material Lyricism in Contemporary Irish Poetry,' presented at Text / Sound / Performance, University College Dublin, 27 April 2019)


Christodoulos Makris’s poetry falls somewhere between that of two of my favorite contemporary poets, the Flarfist Sharon Mesmer and the Conceptualist Rob Fitterman, who similarly appropriate most of their raw materials from the shallow waters and the murky depths of the internet. Like Mesmer, Makris is fascinated by the vibrancy, color and variety of the online world, its carnivalesque atmosphere, inseparable as it is from the vulgarity, ugliness and violence that confronts us whenever we daily find ourselves lost in its captivating labyrinths. It is in this latter sense that his poems resemble Fitterman’s grotesque confessions. Makris’s poetry is not merely voyeuristic but also unabashedly complicit in the sordidness it seeks to portray. Makris is voracious and encyclopedic, as comfortable referencing Michelangelo as the anonymous author of unremarkable dick pics, which at once recall and ridicule the great master’s classical nudes. But if Makris’s poetry shares many similarities with that of Mesmer and Fitterman, it is also strikingly different in tone. Makris oftentimes assumes an ironic, satirical and critical stance towards its material and its authors. In other words, he is celebratory, but not quite. Complicit but also concerned. This is no secret. After all, the question that pervades his most recent book is right in the title: to what extent is all this no longer entertainment?

Christodoulos Makris’ this is no longer entertainment (2019) also uses a conceptual writing approach to illuminate fissures in our social fabric. Makris builds his poems from the internet, culling lines and quips from chat rooms, comment streams, and other ephemeral online spaces. In the poems, he connects his collage work to the avant-garde history of similar experiments from Pablo Picasso to Brion Gysin, John Cage to musical sampling in contemporary hip-hop.

In other words, this kind of experimental writing has its own tradition from which to draw and respond. Rather than pursue beauty in isolation, this manipulated found-text tradition makes art of the ugly truth. Tradition is, after all, just a shared preference that lingers over time.

He explains in the introduction that this is no longer entertainment is “formed entirely out of untreated anonymous or pseudonymous text found in the open comments sections of media websites and other digital platforms”. The poet concedes that the book is, in this way, “unauthored” and demonstrates a variety of artful strategies in processing the mess of the internet into an art that sustains its violence, its contradictions, and its attractions.

There is a lot of graphic sex, perhaps inevitably, but because of the way he has decontextualized phrases from their flow, the poems enact a kind of messy sex of language smashing gangly bits into odd juxtapositions. By building from the “language of real men” today, he invites us to consider the implications of daily experience with language: “confused, disappointed, and scrolling to the bottom / we can actually cause genetic mutations simply by watching violence” (“4”).

As befits true art, there is a movement across the collection. The themes of the poems develop from mouth-breathing, porn-crazed misogyny to mouth-breathing, ultra-glib xenophobia. In other words, the moods of the era are mapped out in this core-sample of the internet where “we watch them pretending to be other people / speaking other peoples words […]why the anger? / it’s easier to be snide and anonymous” (“71”).

This is poetry because it uses language to store a complex network of ideas about the age in which we live. Like the best of Ireland’s literary tradition – the canonical tradition of Swift, Wilde and Joyce – it also highlights the hypocrisies of our age. We use the language of inclusion and tolerance, while permitting casual racism, sexism, and xenophobia.

Makris’s project also bumps into the limits of what constitutes tolerable artistic practice. The UK publisher was obviously comfortable publishing a collection of found or artfully-plagiarised text that challenges the boundaries of acceptable authorial practice (hence, avant-garde), but yet still found it necessary to put in a disclaimer in the colophon: “These poems are a work of fiction. The names, characters and incidents portrayed in it are the work of the author’s imagination.” Are the poems, then, “untreated” as the author suggests or entirely of the author’s imagination as the publisher insists? The colophon also reminds readers that though made up of plagiarised text, “No parts of this publication may be reproduced.”

I believe this hypocrisy in the literary industry, in how we experience and perform language in Capitalism, is at the heart of Makris’s documentary. We want to experience commonality, that national sense of belonging, just as we want free access to the best ideas percolating across humanity.

The kind of conceptual poetry I have highlighted here documents intense and essential limitations to that commonality, to that aspirational freedom. Taking us right to the edge of our ideology is the proper task of experimental poetry, as in Makris’s work [...] This kind of writing that gives up the nationalist illusion of commonality to expose the fault lines of a society is particularly necessary in an age of complex social turbulence on the precipice of even further changes. As the world transforms, so too must its poetry.


Gregory Betts
('As the world transforms, so too must its poetry, disregarding tradition', The Irish Times, 26 December 2019)

The rolling composite voice on show in Makris’ this is no longer entertainment realizes a more complex relationship with polyphony than the page alone can allow. The experience of reading these texts can’t help but engineer a little bad detective work on the part of the reader; we’re accustomed to wading through a myriad of multi-authored opinions as we stroll a heavy thumb through the roll-call of comments that accompany any video, article or op-ed we encounter on screen, and the panoply of voices hidden behind Makris verse linger as spectral voices behind the text. Simultaneously elsewhere and imminent, on the page it is almost as though this is no longer entertainment is in conversation with its sources; toying with the degree of disassociation involved in shadow reading digital text fields, the mind can’t help but err towards an effort to identify where these ideas stem from. Hearing Makris read from the text is a different experience all together. Delivered in his staple flat and unshakeable timbre, the poem becomes a little joke on possession. A play with both the ghosts behind the poetry and with sense of a passing ownership of the perspectives on offer as they interlace behind a first-person vocality. An “I” built out of an acreage of text fields.

- I read section 5 from this is no longer entertainment for the poetry podcast series Words Lightly Spoken, available on i-tunes, Spotify, and other platforms (13 June 2019).

- I read five sections from the book for Hotel magazine's online archive. Recorded in Amsterdam on 2 March 2020, and published on 13 March 2020.

Five sections from this is no longer entertainment translated into Russian by Maria Malinovskaya, and published in Cirk Olimp on 9 October 2019.

yes to the above, a limited edition pamphlet published on 12 November 2019 by The Lifeboat Press (Belfast) in 50 numbered copies, is a collection of outtakes, or 'deleted scenes', from this is no longer entertainment conceived as a 'bonus material' accompaniment to the book.