Showing posts from December, 2016
Show All

if we keep drawing cartoons (If A Leaf Falls Press) 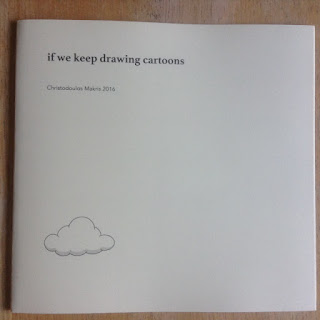 My limited edition pamphlet if we keep drawing cartoons was published by If a Leaf Falls Press earlier this month.


If a Leaf Falls Press is a micropress run from Edinburgh by Sam Riviere, and publishes poetry with an emphasis on appropriative and arbitrary writing processes. Now in its Second Season, the press has since its inception in 2015 published simple, elegant pamphlets with work by some exciting writers and artists including Emily Berry, Crispin Best, nick-e melville, Maria Fusco, Rachael Allen and Sam Riviere himself. My thanks to Sam for inviting me to join this distinguished list.

if we keep drawing cartoons is published in an edition of 36. It comprises ten untitled sections/extracts from the book-length work (in progress) I've been occupied with since mid-2014.

As is the case with most of its titles, the press sold out of if we keep drawing cartoons very quickly.

If a Leaf Falls Press publications are archived at The Poetry Library London and Edinburgh College of Art.
Post a comment
Read more

My contribution 'Five Poems' consists of five extracts from my ongoing book-length work concerned with among other things the concept of reading as a creative process.