Showing posts from November, 2020
Show All 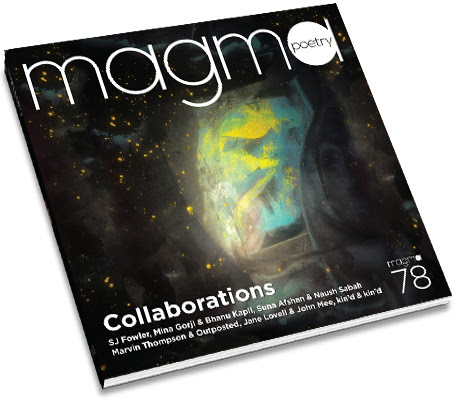 Issue 78 of the poetry magazine Magma is devoted to an exploration of collaboration in its "hive-minded, symbiotic, experimental and downright radical" expressions of the form. I'm pleased that the issue includes 'Poem A: Fashion Week', one of the two strands comprising 'stone washing', my bilingual collaboration with Pierre Alféri - novelist, poet, and essayist, and son of the philosopher Jacques Derrida and psychoanalyst Marguerite Aucouturier . Magma is based in London and publishes three issues a year, with each issue focusing on a different theme and collated by different editors. Magma 78 is edited by David Floyd and Alice Willits . My collaboration with Pierre was originally commissioned by SJ Fowler - who is the subject of an in-depth interview in Magma 78 - for the 2019 edition of European Poetry Festival . From our collaborators' note printed in the issue: 'stone washing' is a two-strand bilingual process poem taking the form
Post a comment
Read more
More posts
ABOUT