Showing posts from March, 2018
Show All

March 30, 2018
I'll be taking part in three events - two in London and one in Manchester - as part of the UK's first ever European Poetry Festival (5-14 April 2018). Curated by SJ Fowler, the European Poetry Festival is a pioneering showcase of live literature including collaboration and performance, and aims at beginning a tradition of showcasing the best of 21st century avant-garde and literary European poetry across the UK. This year the festival encompasses ten events in three cities in under two weeks, with the participation of over 50 poets from 23 countries and support from a host of European and UK institutes. My reading dates and venues are as follows: Thursday 5 April, 7pm Opening Night at Writers Centre, Kingston (The Rose Theatre) : Solo reading in an event also featuring Jen Calleja, Frédéric Forte, Alessandro Burbank and Erik Lindner. Plus readings from European poets local to the Kingston area or currently studying at Kingston University: Astra Papachristodoulou,
Post a comment
Read more 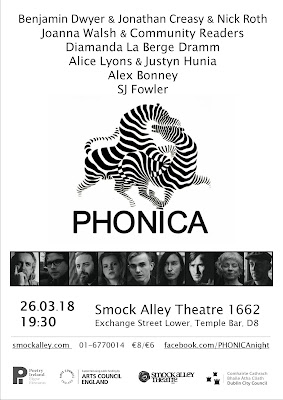 Phonica: Eight Monday 26 March 2018 Boys School, Smock Alley Theatre 7.30pm Admission: €8.00 / €6.00 with: Alex Bonney SJ Fowler Diamanda LaBerge Dramm Alice Lyons & Justyn Hunia Benjamin Dwyer w/ Jonathan Creasy & Nick Roth Joanna Walsh + community performers Phonica  is a series of events rooted in Word and Sound with an emphasis on multiformity and the experimental. Conceived, directed, programmed and hosted by  Christodoulos Makris  and  Olesya Zdorovetska ,  Phonica  aims to explore compositional and performative ideas and to encourage a melting pot of audiences and artists from across artforms. Phonica: Eight will feature performances from a range of award-winning writers, musicians and artists based in Ireland and internationally, including a polyphonic stage adaptation of a digital novella (an Irish premiere), a poetic collaboration set in rural Poland, a three-way musical collaboration based on Samuel Beckett's 'Neither', and a song cyc
Post a comment
Read more 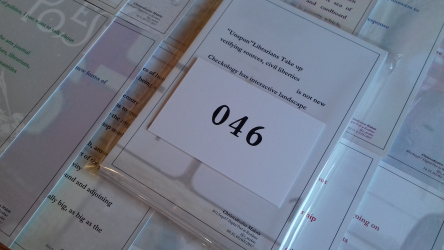 My poetry object Browsing History , a 16-postcard set in snug cellophane, is out today on zimZalla avant objects. zimZalla is a Manchester-based publishing project releasing literary objects. It is administered by Tom Jenks . Browsing History  documents my output as Digital Poet in Residence at the 2017 edition of StAnza, Scotland's International Poetry Festival taking place in St Andrews. Released on the first anniversary of the start of my residency, it represents object 046 on the zimZalla list. For more on my residency project and the publication of Browsing History , read my article on the StAnza Festival website , also published today. To view a free sample, and to order a copy, go to the object page on the zimZalla website.
Post a comment
Read more
More posts
ABOUT