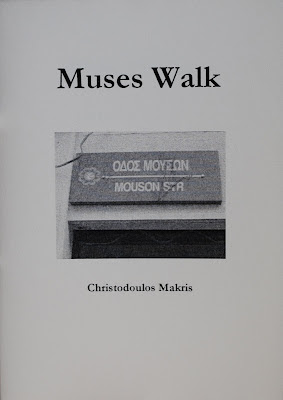 The poem 'Muses Walk' was first published in my collection Spitting Out the Mother Tongue. It's the result of an attempt to "write" a specific street in Nicosia town centre as it stood at a particular time. For this project I produced a book of 16 new poems, each taking a line from 'Muses Walk' as its title and starting point, remembering that Al-Mutanabbi Street could be an ordinary street anywhere and at any time, but with a unique and extraordinary story. And of course Nicosia continues to be scarred by its own history of violence and conflict.

what they said about Muses Walk


"Muses Walk" the book (versus the poem) is extraordinary. It represents - it is - Makris' best work to date. As part of the "Al-Mutanabbi Street Starts in Dublin" initiative, Makris took "Muses Walk" the poem (which is an attempt to snapshot, so to speak, a particular street in Nicosia) and dissected it to create this little art book. He took each line of the original poem and used it for the title of a poem based on that line until he had done so with every line of "Muses Walk". The result is more than a snapshot of a street. Now it is a full album respresenting the people of that street, their lives, and their cultures. This little book is a true treasure. With it, one begins to see that Makris is an important poet, not just for sleepy Ireland, but perhaps for the world.

"Where do you find your muse? Can you find it on a street? And if a street is destroyed, can you use words and pictures to begin to rebuild it, and not just your memories, but other people’s?

These, and other questions, are obliquely posed in Christodoulos Makris’ limited edition chapbook Muses Walk. It is more than just a chapbook though. Makris has described it as artist’s book, and also a ‘performance’, in the sense that he has no plans to reprint in its current, lovely form: 32 A6 pages, hand-bound, on heavy, ivory card.

This emphasis on the form the words are delivered in is important because it is also a tribute to the power of literature, and a specific street where it was challenged. On 5 March 2007, a bomb exploded on Al-Mutanabbi Street in Baghdad, the historic centre of bookselling and intellectual and literary life in the city. Located in a mixed Sunni-Shia area, bookshops, outdoor stalls, cafes and stationery shops were destroyed – with 30 people killed, and over 100 injured.

Makris, Cyprus’ representative in the recent Poetry Parnassus in London, was one of 250 writers and artists around the world asked to produce something to re-create the ‘inventory’ of some of the physical stock that was lost in the attack.

His starting point is one of his existing poems, from his last collection Spitting Out the Mother Tongue, and a rather tricksy challenge: writing a new poem based on, or inspired by, each line within the poem ‘Muses Walk’. It’s almost a form of exegesis on his own work, or rather, an attempt to create a ‘para-poem’, the ‘poem’ that’s lurking within every line of an already existing poem.

‘Muses Walk’ the poem is, in Makris’ words, ‘an attempt to write a specific street in the centre of Nicosia as it stood at a (less) specific period of time’. Short, sharp lines butt up against observations made by a cold, detached eye, which doesn’t miss a thing:

‘The white hour.
From beyond the buildingtops the muezzin’s call spikes the air.
Rows of shop owners push up steel shutters.
At the confectioner’s, apprentices observe displays of cake-making: layers of
marzipan, fresh cream splashed thick in between, brushings of syrup,
flourishes with jelly.
Cold water runs on tap.’

As it turns out, these and the rest of this poem, are all intriguing jumping off points for his new poems. Makris does not limit himself in terms of form in these creations: prose, staccato couplets, even bulleted lists. Dotted through the chapbook are also low-resolution, black and white photos of different scenes – a shop window’s shutters, street signs, porticos with flagpoles and statues – which gives the whole project an attractive air of WG Sebald, and his epic journeys.

Where the conceit of the chapbook works best is when there is space in the original line for the para-poem to take wing itself, and find its own way. Take ‘In a bookshop pervaded by dust an old man sits alone leafing through miscellanies and maps’; now, we have a chance to meet the old man:

‘The Russian knows about facts
and about books, about the histories
of countries and about how things
were made – or became. He’s not

Russian at all, they say, it’s just a name’

And it’s the little moments that one spies out of the corner of the eye that really snag, like ‘no matter / how many lemons are crushed / beneath his feet // they still itch’ in ‘Columns of ants carry bits of potato chips to their nests’. Makris also doesn’t just stay in the one locale. It’s a breathtaking moment when, in ‘A narrow corridor leads to a cramped office space among dense columns of textile rolls; at the back, a hole on the floor is the only decent toilet on the street’ when suddenly we have moved countries: ‘and drizzle that swamps / my baguette – / the new phone captures Paris’.

Sometimes Makris’ showing around his street falls into telling, like the over-eager tour guide who grips our hand a little too firmly while taking us round an unknown town. But generally, the notion of the street as a muse is artfully explored through these sixteen poems, and Makris strikes an excellent balance between a sharp, urban sensibility, an unhurried languor and an elegiac air which reminds us that, even on our streets, there are always stories to be found, to be recreated and to be inspired by."