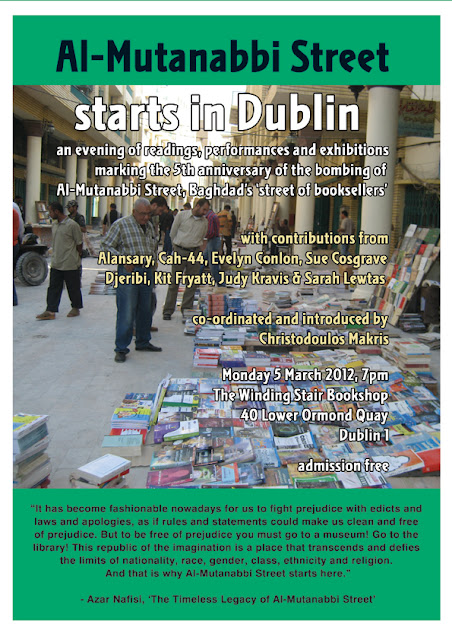 On 5 March 2007 a bomb was exploded on Baghdad's Al-Mutanabbi Street, located in a mixed Shia-Sunni area. More than 30 people were killed and 100 wounded. Al-Mutanabbi Street, the historic centre of bookselling in Baghdad, holds bookstores and outdoor bookstalls, cafes, stationery shops, tea and tobacco stores. It has been the core of Baghdad's literary and intellectual community for many centuries.

The Al-Mutanabbi Street coalition was formed in response to the bombing by poet and bookseller Beau Beausoleil in San Francisco. It initiated and completed a broadside project with contributions of 130 broadsides from 130 letterpress printers, some of which were exhibited at the Market House in Monaghan and the Central Library in Dublin last March. It's now in the process of compiling 'An Inventory of Al-Mutanabbi Street', a project for which over 250 writers and artists worldwide have committed to producing three books each in a symbolic attempt to "re-assemble" the "inventory" of what was lost in the bombing.

Al-Mutanabbi Street Starts in Dublin is the Dublin edition of a series of events taking place around the globe on 5 March 2012 to mark the 5th anniversary of the bombing, and will feature readings, performances and exhibitions by the Ireland-based participants in 'An Inventory of Al-Mutanabbi Street' and other friends of these projects. More specifically, and among other contributions, the event will include a short play, a poetry reading with musical accompaniment, a performance of poetry in translation, a short talk on the significance of the project, and exhibitions of images from books produced for the project.

The writers, performers and artists contributing to the event are Alansary, Cah-44, Evelyn Conlon, Sue Cosgrave, Djeribi, Kit Fryatt, Judy Kravis and Sarah Lewtas. The event is co-ordinated and will be introduced by Christodoulos Makris. The venue is The Winding Stair Bookshop, 40 Lower Ormond Quay, Dublin 1, and start time is 7pm. Admission is free.
Posted by Christodoulos Makris at 10:16