this is no longer entertainment: a Dublin celebration

Please join us to celebrate the publication of this is no longer entertainment!

Having decided against a formal launch of this is no longer entertainment at the time of publication, I'm very pleased to be celebrating it almost exactly 6 months to the day with an event generously enriched by the participation of an exciting lineup of friends and fellow Dostoyevsky Wannabe-published or -associated authors, some of whom are reading in Dublin for the first time.

I'm delighted and honoured that Nadia de Vries, Colin Herd, Dominic Jaeckle, and Joanna Walsh will be contributing guest readings. Sounds will be courtesy of Dostoyevsky Wannabe's Invisible DJs project, and the evening will be hosted by Susan Tomaselli.

The event is kindly supported by the School of English, Dublin City University. 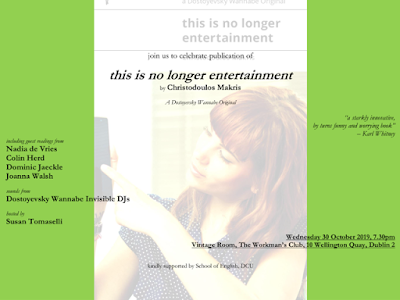 Nadia de Vries is a poet from Amsterdam, the Netherlands. She is the author of Dark Hour (Dostoyevsky Wannabe, 2018) and is currently finishing a new manuscript, I Failed to Swoon. Her first Dutch book, Kleinzeer, was published by Uitgeverij Pluim in 2019.

Colin Herd is a poet, fiction writer and critic. He has published several books including Glovebox (Knives Forks and Spoons Press, 2013), Click & Collect (Boiler House Press, 2017) and Swamp Kiss (Red Ceilings Press, 2018) as well as articles on art and literature in publications including PN:Review and The Independent.

Dominic Jaeckle is an (occasional) writer, (weak) researcher, (amateur) editor and (poor) broadcaster. Jaeckle co-curates and edits the irregular magazine Hotel and its adjacent projects, and his writings and editorial works have been published internationally.

Joanna Walsh is the author of seven books including the digital work seed-story.com. Her work has appeared in publications including gorse, The Stinging Fly, The Dublin Review, Granta, and many others. She is a UK Arts Foundation fellow.

I was really pleased with such a warm and warmly attended, as well as aptly rangy and unclassifiable reading event to belatedly 'launch' my book in Dublin. Proceedings began earlier in the afternoon with a visit by Nadia de Vries and Dominic Jaeckle to Dublin City University’s All Hallows campus on the northside, for a reading and short Q&A session with MA in Creative Writing students as well as staff of the School of English at DCU. As organiser and host of the session Dr Kit Fryatt remarked, it's always a good sign when the audience outnumbers the poets, let alone having to scramble into neighbouring rooms for extra chairs to accommodate those who filled the modest auditorium to the brim. Following Nadia & Dominic's alternate readings there was an interesting discussion on poetic and editorial practice arising from some direct, probing questions from the floor. From there we travelled to the south quays and into the Vintage Room, where the set up for the event was immaculate but for a misbehaving microphone. Maybe it was those anarchic Invisible DJs who were playing havoc with the PA system – but that didn’t deter Joanna Walsh who incorporated the weird acoustics into her whispered, “ASMResque” (as per Jonathan Mayhew) sections of her story 'i wish someone loved me that isn't capitalism' from Liberating The Canon. The evening had kicked off with host Susan Tomaselli speaking a little about Dostoyevsky Wannabe as a risk-taking publishing venture. Dominic Jaeckle read from his as yet non-existent collaborative book due with DW in mid-2020, a “cumulative journal project” encompassing prose responses to a series of photographs, followed by Colin Herd as ever delivering brilliantly witty poems from his own imminent book (December 2019) with the press. Following on from Joanna Walsh, Nadia de Vries read pithy, razorsharp, corporeal poetry from Dark Hour as well as from her new manuscript, before I finished the readings part of the evening with a few sections from this is no longer entertainment. As was fit and proper the Invisible DJs closed the event with a succession of cool tunes while we milled around until closing time, after which some of us headed to nearby Zaytoon for a well-deserved and in my case at least well-overdue bite to eat.

Huge thanks to all who came to my @dw_wannabe book event last night! Special thanks to Dominic Jaeckle @colinjherd @badaude & @nadiadvv for amazing readings, to @STomaselli for hosting and @DCUSchoolofEng for the support. Thanks no less to our Invisible DJs for the cool tunes!
— Christodoulos Makris (@c_makris) October 31, 2019

Posted by Christodoulos Makris at 12:07