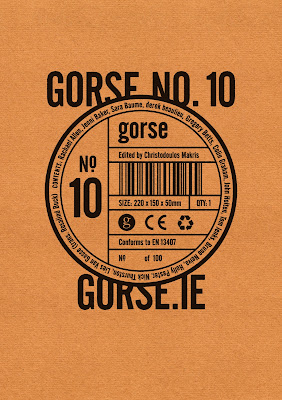 gorse is an exploration of the art of words. gorse is interested in the potential of literature, in literature where lines between fiction, memoir and history blur, in the unconventional and the under recognised. Our influences include, but are not limited to, Hubert Butler, The Bell, the Paris Review, The White Review, & transition.


Interview with 3:AM Magazine


what they said about gorse

“A terrific looking magazine. Continental in feel and full of substance, with an elegant format.” – Antony Farrell, Lilliput Press

“In it’s short life to date Gorse has emerged as among the most vital and outward-looking of Irish literary journals.” – Billy Ramsell

“One of the city’s brightest and best ideas, realised and executed supremely.” – le Cool, November 2014

“It’s certainly a work of great beauty even before you open it. After only four issues it’s become one of the most regarded journals around.” – Daniel McCabe, Magelleria

“One of the most exciting recent arrivals on the scene.” – Nicholas Royle (introduction to Best British Short Stories 2015, Salt Publishing)

“gorse in particular has been exciting to me since its inception a couple of years ago because it has a more European, avant-garde sensibility, which I felt was lacking in Ireland previously.” – Rob Doyle (quoted in ‘The Irish literary journal’s irresistible rise,’ Irish Times, September 2015

“gorse succeeds in breaking new ground […] this is literature that cuts through its readers’ expectations. It’s a risky hand, played with consummate authority by Susan while she questions whether that editorial authority is ever achievable when language itself plays a more duplicitous, more complex, a more multifarious game in the hand of the reader.” – Selina Guinness, curator of Salon Nights, writer-in-residence with Dun Laoghaire Rathdown County Council (2015-2016)

“One of the very best literary magazines in Europe, if not, without hyperbole, the world. The extraordinary gorse, genuinely cutting new ground in 21st [century] literature.” SJ Fowler

“gorse takes a wide view of literature. At a time when other outlets are narrowing their respective views, this outlook is not merely exciting, it is crucial.” – 3:AM Magazine, June 2016

Designed and typeset by Susan Tomaselli

Distribution
Self-distributed. If you would like to stock us, please get in touch.